Your Neighbourhood is a series of local area guides from VIP Almeria. We’re bringing you the best of local villages combined with the latest property data. Retmar & El Toyo postcode 04131.

Retamar and El Toyo are two urbanizations belonging to the municipality of Almería located 13 km away from the capital. Both have a total of 6700 inhabitants. Its urban planning is based on residential areas of villas, duplexes and low-rise apartments, combined with an urban layout with large green areas, making these urbanizations into an urban reference that crosses the borders of our province. It is characterized by being an area with low population density. However, currently its population has increased greatly, being currently the core of the municipality of Almeria that has grown the most. Tourism in this area has also taken off notably in recent years, especially during the summer season.

The main attractions of Retamar are its beach and its 600m long promenade. In Retamar there is also the virgin beach of Torregarcía, where there is the hermitage dedicated to the Virgen del Mar, patron of Almería. Also the ancient tower that gives its name to the beach. Not far away there is an archaeological site where a salting factory belonging to the Roman era was found.

Retamar runs parallel to the Rambla del Agua. In Retamar-center the church is located, one of the main points of interest of the neighborhood.

El Toyo was born in 2005 on the occasion of housing the facilities of the Olympic village of the Mediterranean Games of Almeria. El Toyo has large garden areas and urbanizations. In the Toyo is the Plaza del Mar, where there is a large artificial lagoon near the promenade. It is surrounded by shops and restaurants. This area enjoys a great atmosphere during the summer months, becoming an important tourist and recreation area.

In El Toyo there are also four four-star hotels, an 18-hole golf course, a high-resolution hospital, a congress center and local television facilities, Interalmería. There is also a project to expand west of this urbanization.

Retamar and El Toyo Golf Courses are very close to the Almeria Airport and at the gates of the Cabo de Gata Natural Park.

The North of Retamar, even though it's more “luxurious” with bigger houses, gardens and swimming pools, it's further away from shops and restaurants.

The more popular areas would be the Center and South. The South of Retamar has more options of a nightlife with the beachfront, promenade and chiringuitos. The Center of Retamar is more popular for essential shops, schools, bars, restaurants and others.

“Really anywhere in Spain so it is a lifestyle choice, a single could live comfortably on €1,200 — or less. A couple can live for around €2,000 a month. Eating out at Restaurants is inexpensive as are childcare, groceries transportation and sport and leisure club membership/activities.

The Cost: Depending on the area it could cost in between different prices from different areas:

In Retamar, on the Center-South side, you will find the Retamarina Medical Center and more up to the North side you will find the Hospital for High Resolution The Toyo and also has an emergency part of the hospital.

As for shops you can shop for children's clothes at Mocosete and Pindorin@s, for adult dress shops you can go for work clothes at Bordados & Estampados Gámez, El Baul de Bela for womens clothing. For Hardware Stores Stores you've got Ferreteria Lopez and various pharmacies.

The big draw for Retamar is very simple, it's an easy area to travel to Cabo de Gata, ten minutes from the National Park, five minutes from Almeria Airport  and just 10 minutes to the city.

It has wide open spaces, great for Golf, clean paseo, it is not over developed and provides easy access to other towns and main city.

Lack of shops and no big supermarkets.

For education wise, in Retamar you have one infant school (Escuela Infantil Duendes), a primary school (Torremar) and a secondary school (Instituto de Retamar). All three are public schools and are in the center of Retamar.

For university you have the one in Almeria and there are buses available.

As for supermarkets, there are three supermarkets (Superplus Supermercados, Retamar Supreme SL and US Supermercado) and various bakeries, fishmongers, pharmacies and butchers.

Retamar emerged in the sixties, with the inauguration of the hotel "Alborán Golf", now disappeared. However, it was not until 2004 when it grew and developed as a residential area.

2 Properties For Sale In This Area 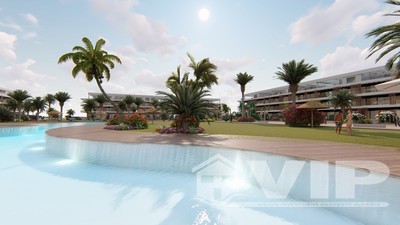 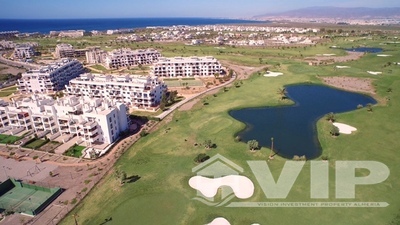