Your Neighbourhood is a series of local area guides from VIP Almeria. We’re bringing you the best of local villages combined with the latest property data. Villaricos Postcode: 04616.

Situated in the south east of the Province of Almeria (Andalucía) in southern Spain and on the Mediterranean coast, Villaricos is a small, unspoilt fishing village, both charming and tranquil, which maintains a typical Spanish feel.

Villaricos has two harbours that sit at each end of the village linked by a broad promenade with numerous places to sit and contemplate. Villaricos is known for it's crystal clear warm waters and it's fabulous diving and for those with their water wings there is a local diving school.

Just beyond Villaricos is a rugged undeveloped coastline where you can relax in peace and solitude amongst the rock pools and sand. There is a good selection of restaurants and bars with food at very reasonable prices and cuisine ranging from native Spanish to British pub food. There is a very popular market every Sunday morning in the square.

“Life has a very traditional rhythm. Every weekend its people meet in the small old village square where, each Sunday, a colourful market thrives.

With a population of less than 1000 people, It is essentially a tourist destination, especially during summer. It has two small marinas, Puerto de Villaricos and Puerto Deportivo de Villaricos La Esperanza”

Where to Move: You do have your pick of arts rich cities, tidy white-washed villages, laid back beach towns such as Mojácar. A small Spanish village in Southern Spain are full of culture and still affordable to live. It is more than just Beaches and Golf.

Here you will find the “Explorers Spain”. Somewhere to live where you still can find unspoiled areas of natural beauty. Where you can spend the morning walking through sun licked gypsum valleys and the afternoon chilling on the beach with a Rioja and a plate of tapas. Where you can choose what to do each day rather than let the day choose your life. Discover beaches, coves and places that feel like you are the first person to have been there and yet close to the hub of vibrant beaches that prefer beach bars and live music, Mojácar is a choice, your choice.

This long curved sandy beach is more frequented being closer to the village and being served by the popular Las Brisas Beach Bar, which is great for paella, sardines and long relaxed beach lunches. There is a children’s play area near the Castillo de Cristal at the village end.

Just the other side of the Castillo and reached from the Maritime Paseo, is this small sand beach, bounded by rocks on one side and the tiny La Balsica harbour on the other, where there is a delightful 'chiringuito', serving excellent tapas.

This is a black pebble beach, right in front of the village, with exceptionally clean bright water.  Somewhat uncomfortable under foot, it is nevertheless the beach of choice for the local villagers. Excellent for snorkelling, the remains of the old iron 'embarcadero' of the mining days are still visible on the sea bed beyond the mirador.

Villaricos is a municipality of Almería province. It has a population of less than 1000 people in the distinct area.

International buyers make up 63.2% of the property market.

Villaricos' castle was built on a previous one, in the 18th century, between the years 1763 and 1772, during the reign of Carlos III of Spain. It was a military post and was later used by the Spanish Civil Guard. The part to the sea has a wall in a horseshoe-shaped slope. The tower reaches eleven meters high distributed on two floors, a terrace closed by a thick wall that faces the ground and defended by arrow slits and pockets. The interior is closed with vaulted ceilings on its first floor.

Restored in the early 90's and with free access to the outside, it is in good condition. It is owned by the Cuevas del Almanzora City Council. Its current use is as a tourist information office and exhibition hall

Villaricos uses its ports to promote tourism activities such as sightseeing, fishing trips so does get a lot of footfall locally.

The Sunday market is a popular place on a Sunday morning as it offers an abundance of local fruit, veg and stalls selling everything required for daily living.

If you're looking for places for having lunch or dinner there are some good restaurants like El Galeón, Bar la plaza, Lucky Bar or Casa Paco.

If you're looking for a coffee you should go to bar-Cafetería el Gato, which has very nice coffee and a relaxing ambience.

Villaricos is a fantastic spot for fishing and Scuba diving.  With exceptionally clear warm waters, creating fantastic visibility and the opportunity to see unusual and some unique species.

There are also several interesting structures, including the underwater cavern of La Catedral and the remains of the old loading structures from Villaricos’s mining past, now submerged off the village.

Molasub are based in the small Esperanza Harbour in Villaricos. Affiliated with the Proffesional Association of Diving Instructors (PADI) for diving trips; including introductional / discovery, open water and dive master courses.

The real charm of Villaricos lies in its old fashioned simplicity and warmth of spirit and it is this lack of pretension that catches you in the end.

It is a small village with a coastline of just 7 km long so it is ideal for morning and afternoon walks. It has all the services and amenties for day to day living. For weekly shopping, you would need to visit the local towns of Vera or Vera Playa.

Every Summer there's a music festival named Dreambeach just beside the town and it can be noisy for up to a week in August.

There is a infantile building and used for community events on Calle Grupo Escolar, however no primary or secondary schools in Villaricos. The children normally attend in Palomares to go to school at CEIP Alarcón Fdez. de Arellano.

There is one convenience store for daily foods and the nearest supermarket would be in Palomares named the Navarro or in Vera playa you've got Mercadona and Consum.

1882: The 'Cathedral' of Villaricos’…... It could have been a Gaudi Building, Sadly it was never built.

Did you know that Antoni Gaudí with his architectural style was commissioned to design a church in Villaricos?

Antoni Gaudí is the most famous architect of the Catalan Modernism movement, and his works can be seen all over the city in various places. His works are very recognizable with its own characteristics with the unfinished La Sagrada Familia is the most famous landmark.

On March 13, 1882, Father A. de Saint Alode, superior general of the Celestine Congregation of the Order of Saint Benedict, wrote to Gaudí, hastily commissioning a project of a church dedicated to the Holy Spirit, to raise it up next to a monastery in Villaricos, municipality of Cuevas de Vera in the Andalusian province of Almería.

Gaudí was very happy; I could finally make a great church. They gave him two months to complete and Gaudí asked for four. He got down to business and did what was promised. In four months, under the supervision of Joan Martorell, he drew what he called "the Villaricos Cathedral". It looked very similar to the temple of the Salesas, in the part that faces the Paseo de San Juan in Barcelona which he started afterwards on May 18, 1882 which he was the assistant to the project by Joan Martorell i Montells, being considered his most important work.

5 Properties For Sale In This Area 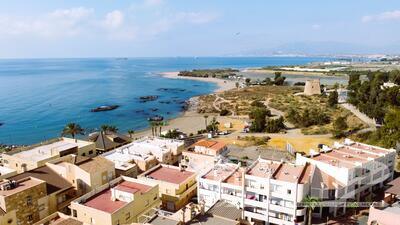 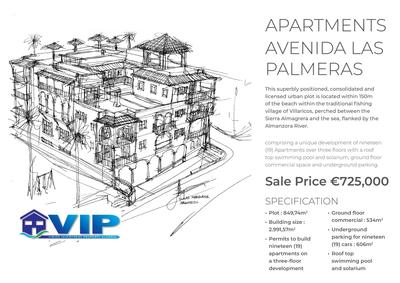 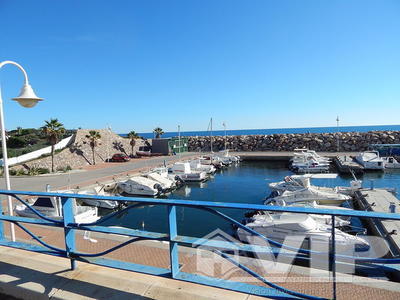