Your Neighbourhood is a series of local area guides from VIP Almeria. We’re bringing you the best of local villages combined with the latest property data. Bédar postcode: 04288.

Situated in the south east of the Province of Almeria (Andalucía) in southern Spain and close to the Mediterranean coast, Bédar is in the foothills of the Sierra de los Filabres Mountains , belonging to the Los Filabres district, with its river plain and Moorish farmhouses in the surrounding area.

It offers an image of purity which fits in with the simplicity and kindness of its people and with the village, the buildings of which are inherited from Arabic times.

The beautiful whitewashed village of Bedar is perfectly situated being just 35 minutes from Almeria airport and a few minutes from the motorway, giving easy access to the rest of Spain. Yet it is only 15 minutes drive to the coast for the beaches and golf courses. There are some good bars and restaurants, a bank, shops, a supermarket, medical centre and a pharmacy. It is It is a quiet place with beautiful views of the different towns below to the coastline.

Bédar: Is the main part of the town. (where most amenities are).

Los Pinos: A Hamlet that is part of Bedar with a population of approx 30 people.

El Campico: Small district with a population of 39 people.

Los Matreros: District where you can find a natural spring.

Los Giles: Small district with the curiosity that there are a lot of fossils found in this district.

El Pinar: Residential district that is part of Bedar, but is the same distance from Bedar to Los Gallardos.

Bédar is a municipality of Almería province. It has a population of just under 1000 people.

Top entrance to the village

Where should I get a light bite to eat?

Where should I try for lunch or dinner?

On the way up to Bédar town: Restaurante La Fuente, el Jardín.

So many activaties, clubs, associations and points of interest:

This church dates to the sixteenth century and was built by order of Bishop Antonio Carrionero (1558-1570). The church consists of three naves; the central nave is covered with armor to which a plaster vault was added when it was restored in 1682. It was initially dedicated to Santa María, since it depended on the parish of Antas, but when the church became independent from it in 1682, it was renamed Santa María de la Cabeza, with San Gregorio Naciancieno as its patron. The church is located in Plaza Santa María.

This square in the heart of the town owes its name to Dr. Don Antonio Bolea (1887-1956), who was much loved in Bédar and offered his services to the residents for a long time. The most unique monument on the square is the oil press from the old municipal mill, which sits next to the fountain, Fuente Temprana.

There was once a small chapel in this square where Saint Gregorio was kept. A wooden cross stood in the square in honour of those who fell during the Civil War. When the square was renovated, the wooden cross was replaced by a new one forged in metal by the students of the school workshop in 1994. Eventually, this cross too was replaced by a monument of a miner, built in white marble from Macael, in honour of the deceased miners of Bédar. It features the shell of a turtle representing the black turtle, an autochthonous species protected since 1973 due to the danger of extinction. The square forms a fantastic viewpoint from which one can enjoy a magnificent landscape overlooking some of the neighbouring municipalities, such as Mojácar, Turre or Garrucha.

The Mining Museum opened in 2009 for the conservation and dissemination of the historical and anthropological heritage of Bédar by highlighting its mining past.

The views, locals, food, comfort. This is village known for its amazing community spirit.

Some hamlets are too far a walk from shops, no proper supermarket, far from the beach and sometimes from society.

There are two in Bédar town: Colegio Público El Puntal and Colegio de Educación Infantil y Primaria Asturias. Both are public schools and the closest Secondary school is in Antas (IES La Azahar) or in Vera (IES El Palmeral or IES El Alyanub). There are school buses from Los Gallardos to Vera school.

The mining and agricultural history of Bedar can be best appreciated on one of the Bedar walking routes.

In the 19th century, there was an economic revival in Béjar, and its appearance changed because of the mining. It was the third most important mining area after Filabres and Alhamilla. It had iron, lead, zinc and copper sites, lead being the most important. It was in the Pinar, which today has become a residential estate with many refurbished buildings from the old mining village.

To transport the mineral in 1888 the first overhead cable of the province was built, which went from the Pinar to Garrucha beach, where in 1860 a blast furnace had been installed. In 1896 a railway line was also built to Garrucha, where a landing pier for the mineral had been installed. After the First World War, the mining activity gradually died down up until the thirties when it practically ended.

From the fifties onwards its main activity has been agriculture.

1 Property For Sale In This Area 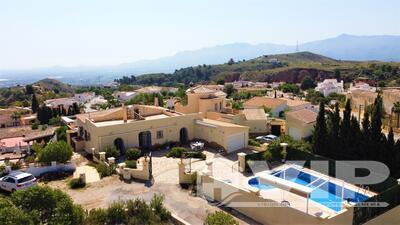